Commuting to work and eating ice-cream

Here’s a short summary of some of the activities that have taken place in Boulder over the last week!

Tube to Work day
When we talk about a commute to work, we usually think buses, trains and bikes. Boulder has taken things to the next level with tube to work day, providing another alternative way of getting to work. In its 7th year, the event is growing seeing its biggest turnout to date last Tuesday, with just over 40 tubers braving the cold waters of Boulder Creek Canyon and earning themselves a free breakfast. I hope their bosses don’t mind having employees turn up to work looking like wet dogs. I would have considered participating in this event, but I feel like i am technically ineligible. 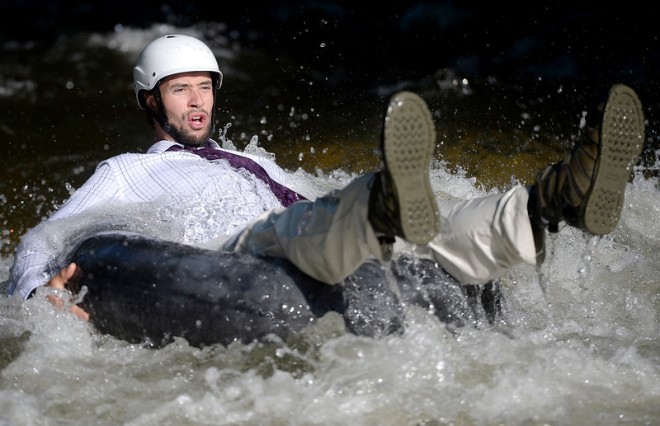 Slide The City
Following on from Tube to Work day, the following Saturday saw another interesting outdoor activity take place – “Slide the City”. Residents were able to traverse several blocks of the city down 13th street atop inflatable tubes. Early bird prices were offered for $15, with three-ride passes at $30 and VIP passes at $50. Expensive, but also popular with many options selling out and over 8,000 RSVP’ing yes on the events facebook page. Being 300 meters long, a single ride was charging at a rate of $5 per 100 metres, or 5cents per metre. Unfortunately this was another event I did not take part in, and feeling a little bit left out, there was no way of missing the third special actvity for the month – National Ice-Cream Day!

National Ice-Cream Day
Celebrating National Ice Cream day just makes sense. Originating from the Joint Resolution signing in 1984 (the one mentioned in the movie National Treasure featuring Nicholas Cage) this event takes place on the third Sunday in July around America. Ok I might have lied when I said celebrating National Ice Cream day makes sense. I did a little bit of research but failed to see how Ice Cream and the Joint Resolution are related, but I do know that Ice Cream is delicious and that it should be celebrated. Unfortunately this is not a public holiday, but hopefully one day when there is enough demand, Barrack Obama will have no choice but to rectify this problem. We’ve planned ahead and found a local organic supermarket that sells homemade ice-cream, now it’s just the decision of picking the flavours. Stay Tuned.

It was my first time in Norway, so I was excited to pin a number on for the Tour of Fjords – a three-day stage race on the Southern coast. The few things that initially pop into my mind when I…
Lifestyle

Taking a step back before Romandie, I had spent 12 nights sleeping at 2200m above sea level for some altitude training. We were staying in a Hotel at the top of El Teide, which happens to be the most frequented…
Race

I was a little bit scarred with memories of this race in 2017, experiencing some of the worst weather I have had to race in. I distinctly remember stage 2, racing in sleet and snow and having difficulty trying to…